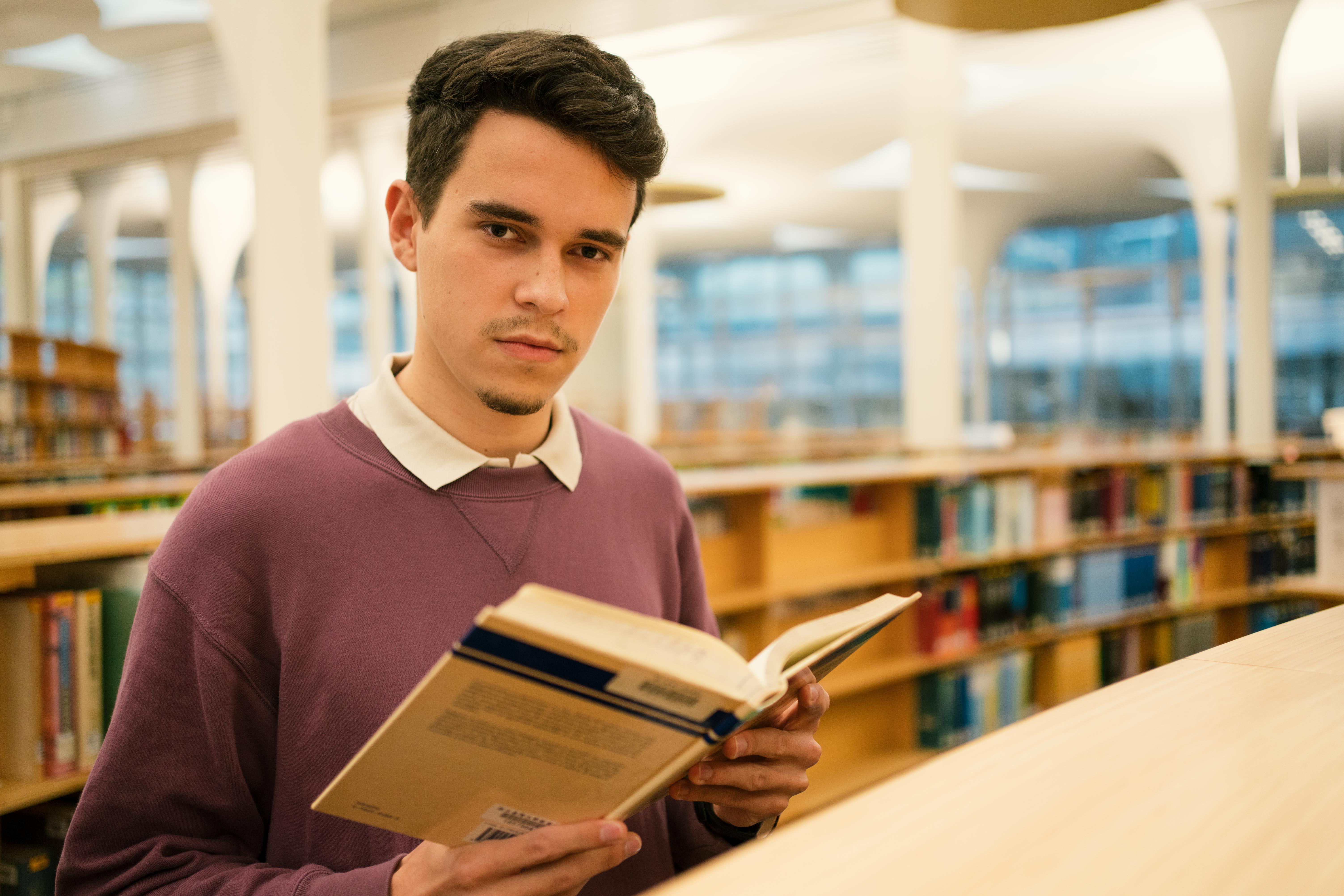 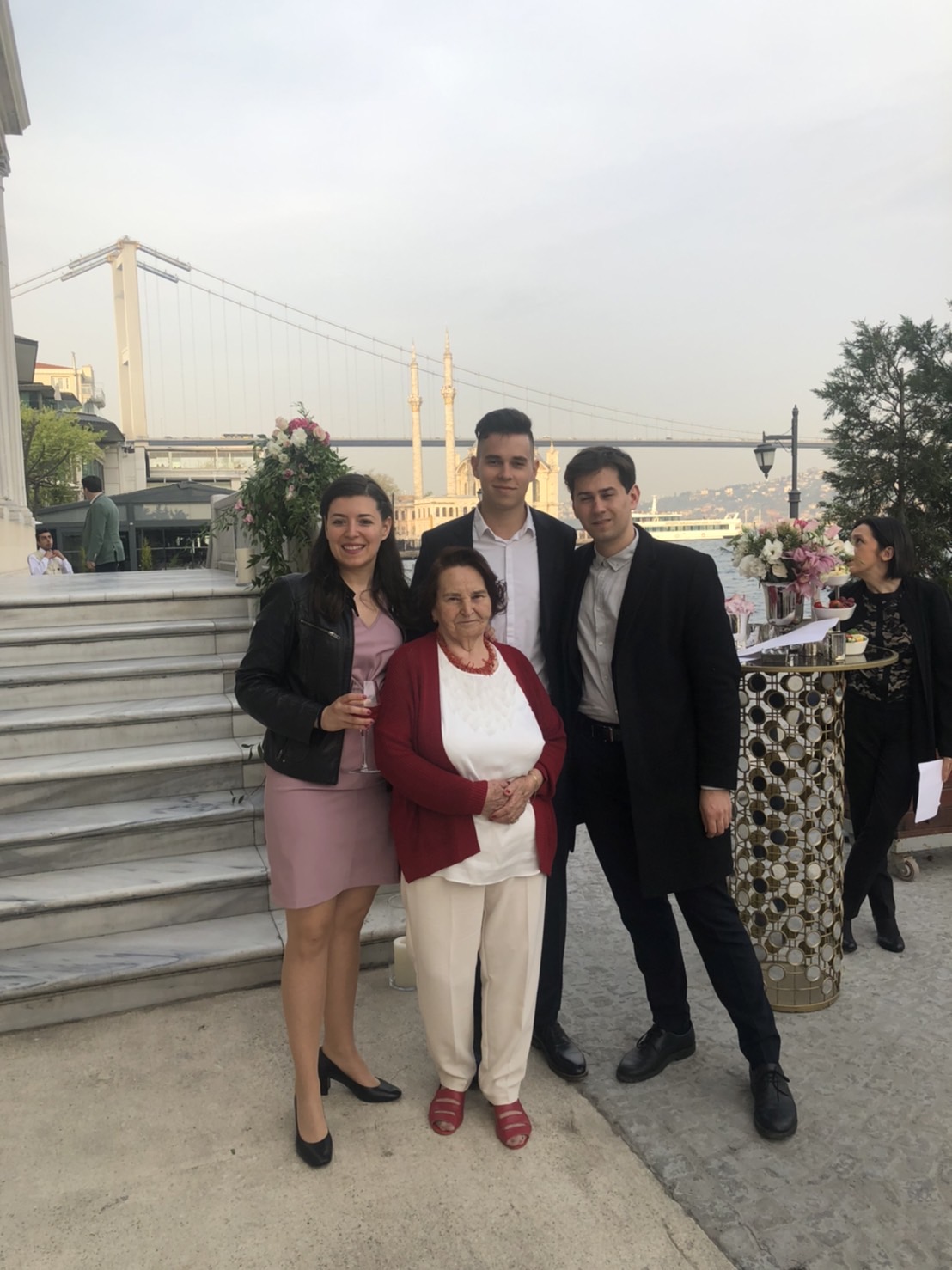 Part I: The Transnational Adventurer is Born
As the tall, handsome Haris Hadzimejlic sat down with the Office of International Affairs to tell us about his journey to Taiwan, I was struck by his calm, patient, yet engaging demeanor. No doubt his calm and engaging presence helped him to adapt to the numerous countries he lived in before beginning his studies at National Taiwan University (NTU).

Haris is a first-year master’s student in the Department of Agricultural Economics. Before moving to Taiwan, he lived, studied, and worked in seven different countries learning four different foreign languages. His life journey began in Vienna, Austria, where he was born to Bosnian parents. He grew up in a multicultural environment, often traveling between Austria and Bosnia.

Reflecting on his childhood, Haris told us, “My parents are from Bosnia and about 30 years ago there was a war there, so they had to flee as refugees. They decided to flee to Vienna, Austria, and that’s why I was born there. I grew up in Vienna, but I used to go to Bosnia every summer with my parents. So, I was influenced by both cultures, Austria and Bosnia, at the same time.” Perhaps it was this multicultural, multilingual upbringing that inspired a sense of adventure in Haris. When he was just fourteen, he decided he wanted to live abroad independently for the first time.

“At fourteen, I already decided that I wanted to do an exchange year in high school to learn Spanish,” Haris said. Although he could have chosen to travel to Spain, that felt too close to home. He decided to go to Costa Rica and live with a host family. There he immersed himself in the language and culture, “I had to learn the language very fast in order to survive there. After four months I started picking up the language and after ten months I was pretty fluent.” With one country and one language down, this was only the beginning for Haris.

When he returned from Costa Rica, it was not to Austria, but to Russia. His father got a job in St. Petersburg, so Haris completed high school at the Anglo-American School there. He quickly picked up Russian, as it is quite a similar language to Bosnian. With another country visited and language mastered, he knew college was his chance for another adventure. Choosing between the United States and United Kingdom, Haris decided to study business management at Queen Mary University of London. But he knew studying in only one country for university would not fulfill his ambitions.

“In the first year already I was thinking, maybe I can do an exchange year somewhere,” he said. “I learned Spanish very fast, I learned Russian very fast, so I was motivated to learn another language. I decided to do something completely different, which was Turkish.”

Haris’ plan came to fruition when he received the Erasmus+ Grant, covering tuition and living expenses to do a year-long exchange at Istanbul Bilgi University. During his time there, he found Turkish was much harder than Spanish. After his year there, he noted, “I was not fluent but I could have daily conversations with people. But now I forgot almost everything, it’s such a different language.”

After graduating from Queen Mary University, Haris decided to complete his Austrian military service requirement before pursuing a graduate degree. Rather than joining the military, he found a suitable alternative through Austrian Service Abroad, “an organization that sends young Austrians to different Holocaust Memorial Museums around the world.” They stationed him at the memorial center in a little village in France, called Oradour-sur-Glane.

Working at the memorial center was a life-changing experience for Haris. “For me, that experience working for one year in France had a lot of impact on me in terms of how I want to give back to the community,” he reflected. “So, I also helped out in establishing a cooperation between our organization and the Srebrenica Memorial Center in Bosnia.” Haris continues his work the Austrian Service Abroad today, establishing connections between them and museums or memorial centers in Taiwan. But after spending time in so many countries, what inspired him to come to Taiwan? 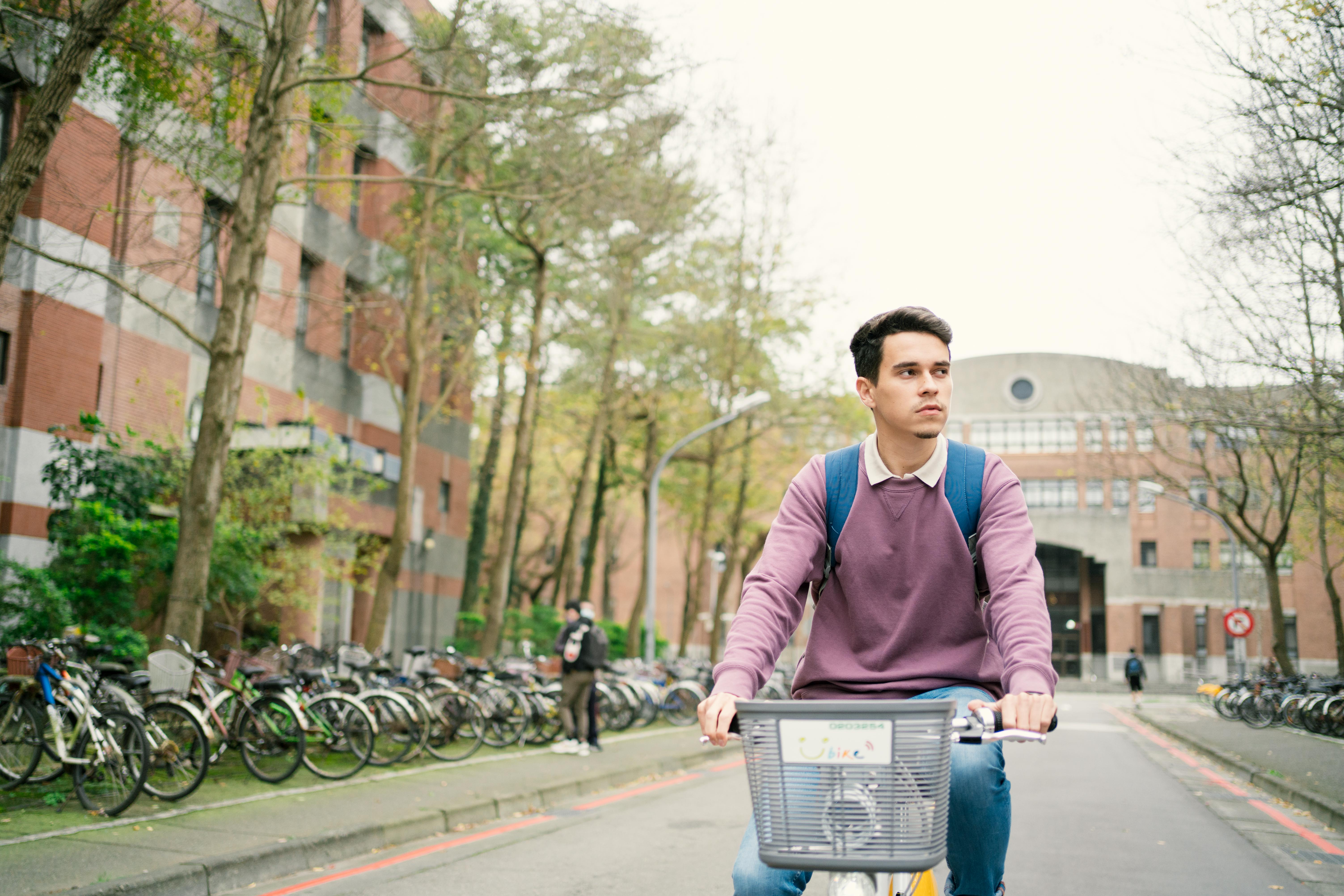 He discovered National Taiwan University’s International Master’s Program in Agricultural Economics, and thought it related to his business background while also focusing his graduate studies on a specific topic. Haris was also awarded the Taiwan International Cooperation and Development Fund (TaiwanICDF) Scholarship to sponsor his studies at NTU.

Receiving this scholarship and stipend solidified his decision to come to Taiwan, as it relieved any financial burden from his family. Haris also marked the openness of Taiwanese society as a deciding factor between Taiwan and China; “I felt much more comfortable coming to Taiwan and being able to freely express myself rather than being filtered.”

One of Haris’ main goals while studying at NTU is to master Mandarin Chinese. When he first started his Chinese language classes, he found the structure and grammar surprisingly simple. “There’s no conjugation of verbs,” he noted, “and when you want to saw January, February, March, you say 一月，二月，三月 (literally ‘one-month, two-month, three-month’), you just have to remember the word month.” However, as he continued to learn more he “realized it’s completely different in terms of writing characters and pronunciation.” He remembers, “Once I tried to talk to locals and then I pronounced the tones wrong, and they looked at me like… what?”

Despite these challenges, Haris notes that his language skills are continuously improving thanks to his classes and living in Taiwan. “I realize every month I know more and more characters,” he said. “When I first came here I looked at all the signs and thought, ‘I will never be able to understand.’ But now it’s getting better.” Furthermore, he is determined not to stop until he is fluent. “My mom said, ‘After two years when you finish your master’s, you will come back, right?’ I told her, I will come back when I am fluent in Chinese.” 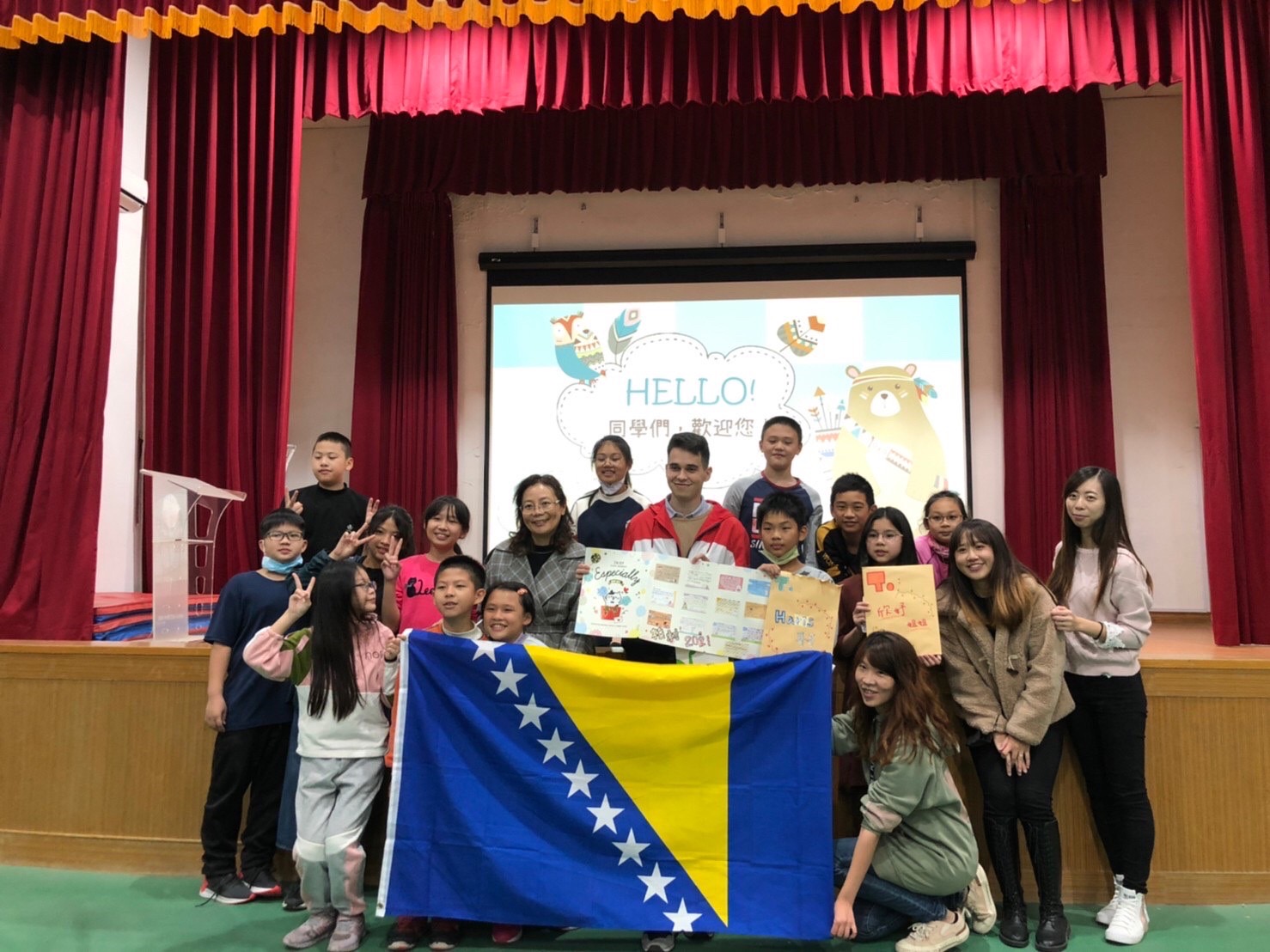 Part IV: Life in Taiwan
When Haris first arrived in Taiwan, he discovered that, “Taiwanese people are very nice to me and they always try to help me out. I was really surprised by that. But it has been harder than I expected to build strong connections.” Taiwanese people are known for being polite and welcoming, but Haris is not alone in struggling to make local friends when first settling in Taiwan. Language and cultural barriers can make it harder for people to connect quickly and deeply.

But with patience, time, and shared experiences, acquaintances can become close friends. One thing that is always good to bond over in a foreign country is food. There is often the opportunity to try local foods and strengthen friendships in the process. Recounting one such memorable experience, Haris told us, “One of my local friends here invited me to a year-end banquet (尾牙). I was the only foreigner there, and I think I tried ten different new foods that I never ate before. For example, chicken feet and jellyfish. I liked the jellyfish!” When you’re open to new things, who knows what you will discover next!

Beyond trying exotic foods, Haris immersed himself in parts of Taiwanese culture by volunteering for the International Companion Learning (ICL) Program. This is a program under the Ministry of Education designed for international students in Taiwan. They are matched with a local school to engage in cultural exchange with students, age 10-15. Haris chose to match with a school in Kinmen County.

Regarding his choice, Haris said, “I chose my school to be in Kinmen county on purpose, due to the interest I have in the geopolitics.” Haris grasped the opportunity to explore a different and dynamic part of Taiwan. Once matched with a local elementary school, “I had a weekly session with them talking about Bosnian culture. And they were teaching me about Kinmen local culture. I went for a trip there and they showed me red turtle cake (紅龜粿) and they taught me about the wind lion gods (風獅爺).” The ICL program gave Haris a unique opportunity for cultural exchange.

Along with learning new things, Haris also connected his past experiences with Taiwan. Continuing his work with the Austrian Service Abroad, he established a partnership between his organization and the Shung Ye Museum of Formosan Aborigines. “We cooperate with aboriginal communities because we also try to promote their cultures more,” he said. Soon the Austrian Service Abroad will send their first volunteer to Taiwan to do meaningful work with the museum. But Haris didn’t stop there; “There’s the Jewish Community Center which opened in December, and we will have a cooperation with them as well.” Haris’ transnational adventurers have opened up the doors for more international cooperation, mutual support, and cultural exchange between Taiwan and Austria.

Part V: Advice for Future International Students
As the first Bosnian international degree-seeking student to study at NTU, Haris hopes that more young people from Bosnia will come study in Taiwan. His first piece of advice is to, “learn a little Chinese before you come. Also, be open to cultural differences, don’t get offended, take it easy and understand that there is this cultural difference. Make sure you adapt to the culture rather than imposing your own culture.” Learning the local language can help ease your transition to living in a new country. It also builds better understanding of local cultures, helping you to adjust and adapt.

Haris has been busy since his touch down in Taiwan, and he advises future students to not shy away from new opportunities. He said, “I think future international students should really take every opportunity that Taiwan gives to them. For example, I think the ICL program was a really, really nice experience. They try to immerse you into the culture here in Taiwan and you learn many different things.” Taiwan and NTU offer many different avenues for international students to connect with local peoples and cultures, like the ICL and Homestay programs. These offer the chance to travel and experience new parts of Taiwan. Feel free to contact OIA if you have any questions about opportunities like this!

This coming summer, Haris will also be participating in the inaugural NTU International Mentorship Program. This program is tailor made for international students, connecting them with top-level organizations across all sectors in Taiwan. Students will have the opportunity to intern at one of seventy-one renowned organizations participating in the program, led by a senior-level mentor. This gives students the chance to put their theoretical learnings into practice, and inspire them with new perspectives on life and career.

>>>Come join us at NTU, find more admission details on our website!

>>>Stay tuned for our next case of OIA Investigation Bureau.